The Chevrolet El Camino, a coupé pickup, was released in 1959 as a direct competitor to Ford's Ranchero. The highly stylized El Camino quickly surpassed its rival in sales during its first year of production, while also taking first place in the hearts of many.
In addition to steerable front wheels, opening doors and hood, and a detailed engine, this 1/18 scale model's unique license plate "70 ELKY" is a nod to the nickname used by many fans in the muscle car community. 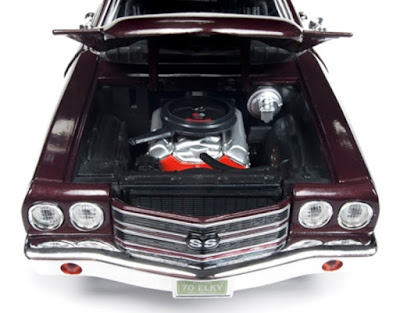 The interior and chassis of this American Muscle model accurately reflect the redesign of the outer body and interior in Chevrolet's 1970 El Camino.
Celebrate the 100th Anniversary of the Chevrolet Truck and see more American Muscle at 3000toys.com!
Posted by Toy Master at 9:30 AM