Hitch and Tow Series 17 is here! Greenlight has just rolled out its latest lineup of the 1/64 scale vehicles featuring color-coordinated trucks and trailers.

The Hitch and Tow series is perfect for dioramas, with true-to-scale details including authentic livery, chrome accents, and real rubber tires.

In addition, each trailer comes with a corkscrew jack for stand-alone display, if desired.

Remember to keep an eye out for Green Machines, which can be found in cases (#32170-MASTER) and make up a small percentage of each production run. Visit us at 3000toys.com to place your orders today!
Posted by Toy Master at 9:30 AM 2 comments:

Just arrived from Universal Hobbies is a wide variety of new farm tractor replicas in 1/32 scale!
Both modern and classic tractors are available, from David Brown, Ford, and Case IH.
Universal Hobbies has earned a reputation for fantastic, highly detailed agricultural and industrial tractor replicas in a variety of scales. Their offerings are sought after by collectors all over the world!
Designed with the serious collector in mind, these models feature:
• Heavy diecast metal construction
• Authentic markings
• Factory paint schemes
• Rubber tires on metal wheels
• Detailed interiors
• Working hitches
• Authentic counterweights where applicable

A wide variety of Universal Hobbies models are available to order today at 3000toys.com!
Posted by daniel.3000toys at 9:13 AM No comments:

Season three of the fantastic Netflix Original series Stranger Things recently premiered, and Jada Toys is celebrating their love for the show with new vehicles available for pre-order at 3000toys.com!

Each Stranger Things model comes with a collectible accessory for you to enjoy, and some included features are opening doors and hood, as well as a functional trunk.

Movie buffs and cinephiles alike will enjoy the themed packaging that's perfect for displaying their new model and collectible accessory. 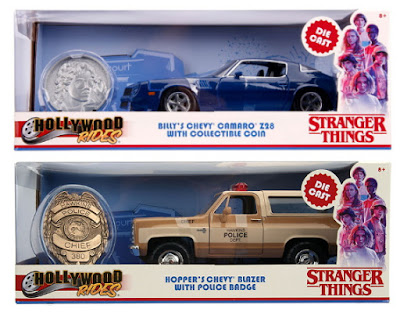 Be the star on movie night when your friends discover models from all their favorite movies! Find more trending Hollywood Rides by Jada at 3000toys.com.
Posted by Toy Master at 9:30 AM No comments:

Arriving in the coming weeks from Conrad and IMC are several new Mammoet replicas!
The Dutch firm Mammoet, founded in 1807, is a major player in the global heavy-lift equipment market. Their distinctive red and black livery is instantly recognizable throughout most of the world.

Liebherr, MAN, and Grove machines in both 1/50 and 1/87 scales are among the replicas that are arriving soon. Features include:
• Articulated functions
• Realistic rubber tires
• Authentic Mammoet liveries
• Detailed interiors
• True-to-scale detail

Whether you're adding these models to a large format diorama or putting them on display in a case, the quality is sure to please!
Pre-order these great models today at 3000toys.com!
Posted by daniel.3000toys at 8:58 AM 1 comment:

The addition of panel delivery vans to post-World War II United States made the ideal stage for many brands to advertise. As a top ten oil company, Gulf Oil was among those who capitalized on the prime marketing real estate.

In this Auto World replica of a 1948 Chevrolet Delivery Van, the authentic Gulf Oil livery decorates the side panels.


In 1/18th scale, this model is a great option to showcase all the features expected from Auto World!

The steerable wheel controls real rubber tires, while the opening side and rear doors reveal the accurate interior. With all these details and an opening hood, this model is perfect for interactive displays.
This 1948 Gulf Oil Panel Van is a limited edition, so visit 3000toys.com today to bring one home!
Posted by Toy Master at 9:30 AM 1 comment:

Coming this month from Wiking are a variety of new vehicles in 1/87 (HO) scale! These replicas represent freight trucks from Hanomag, MAN, and Mercedes-Benz, and include some popular European haulage companies.
Equally as at home on a display shelf as part of a diorama, these fantastic little trucks will make a great addition to your collection!

Wiking's newest offerings arrive later this month, so get your pre-orders in today at 3000toys.com!
Posted by daniel.3000toys at 8:44 AM No comments:

Summer is the perfect time to heat up your collection by adding some bright colors with familiar travel trailers like the 2017 Winnebago Winnie Drop (#34060-E) or the 1959 Catolac DeVille (#34060-A)!

Check out 3000toys.com to find your favorite Hitched Homes models available separately or as a 6-piece factory-sealed case (#34060-CASE), and don't forget to hunt for possible "Green Machines" in your Greenlight cases!
Posted by Toy Master at 9:30 AM No comments:

Arriving this month from MotorArt is a brand-new Volvo L350H Wheel Loader in 1/50 scale!
Volvo’s L350H increases fuel economy over its predecessor by 20% while introducing advanced load-sensing hydraulics. 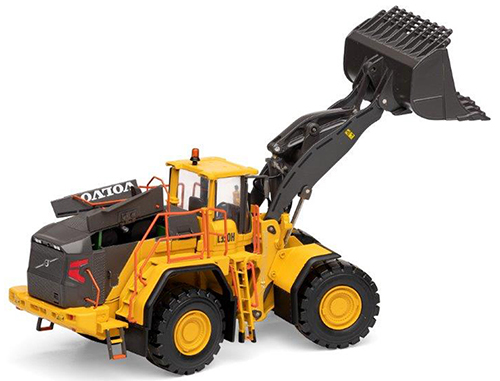 This beautiful addition to your 1/50 scale diecast collection is coming very soon and is available to pre-order today at 3000toys.com!
Posted by daniel.3000toys at 8:34 AM No comments:

Celebrate America's Birthday with a Gift for YOU!

Enjoy Free Shipping to enjoy maximum savings during this 2-Day Special Sale!
⭐ Wishing you a Happy Independence Day from all of us at 3000toys.com! ⭐
Posted by Toy Master at 9:17 AM No comments:

John Deere's 9620R tractor is currently the largest John Deere tractor ever released, measuring over twenty-six feet in length. John Deere has also partnered with Cummins to include the Cummins X15 engine underneath the mighty behemoth's hood, which works in tandem with the electronic engine controls to increase fuel economy and performance and decrease exhaust emission. Due to its sheer size and variety of improvements, the attention of many fans has remained fixed on the 9620R since its initial release in 2015.

With such popularity, it's no surprise that ERTL chose to add the 9620R to its Prestige Collection. The 1/16 replica features all new tooling including left and right engine covers with a diecast front and rear body. The functional cab door opens to highlight the detailed interior.
The Prestige Collection from ERTL is a collectible line of replicas for those who appreciate the high level of authenticity and detail that ERTL is known for.

Find other John Deere models and more by ERTL at 3000toys.com!
Posted by Toy Master at 9:30 AM No comments: