We were very saddened by the news that one of our favorite die cast toy magazines was going to be calling it quits in just a couple of months. We received an email last week from Toy Cars and Models magazine which stated:

"We at F+W Publications continuously analyze our publishing strategy to determine if we are meeting your needs and Company goals. We take into consideration the marketplace we serve and the opportunities available for each of our magazine titles. After much analysis and deliberation, we have determined to cease publication of Toy Cars & Models Magazine, effective with the February 2008 edition."

Be sure to get copies of both the January and February issues of this great magazine before it's too late....

Katharine
Posted by Katharine - Executive VP at 9:39 AM 2 comments:

The Christmas RUSH is upon us, and we are lovin' it! We have extra crew here to make sure every order gets out the door as quickly as possible, and we've added Saturday hours to answer the phones and ship packages. UPS is parking 2 semi trailers at our warehouse each day which are filled with outgoing packages. And, we are upgrading to an even bigger computer server to better handle the multitudes (literally hundreds and hundreds of people) that are on the site at any given moment.
If you are thinking about ordering later, I'd really need to encourage you: DON'T WAIT. Even though we have way over 10,000 items available and stocked semi after semi load for this season, there are already some items that have sold out. In particular, get your orders in now for Norscot models as well as New-Ray trucks. We'll be restocking items that do sell out, but at this point, we can't get most items restocked in time for Christmas.
TOP 10 Hottest items for this Christmas Season While looking over the December calendar today it became apparent that Christmas shopping (or should I say shipping) season will be a couple days shorter than average this year. Since Christmas Day falls on a Tuesday, the last day for air shipping will Friday the 21st or Saturday the 22nd. Ground shipments will need to be on the road no later than Monday the 17th to reach the coasts from our warehouses. Thankfully, we have noticed over that last few years that shoppers are allowing a little more time for delivery than before. We actually expect to peak during the week of the 10th. From Thanksgiving through mid-December we will have extra shifts filling UPS trailers to keep up with the rush.
Posted by Darin - Marketing & Information at 9:31 PM 1 comment:

We attended the iHobby Expo last week in Chicago. We had a chance to talk with several die-cast manufacturers about several issues including their plans for 2008 and the recent safety recalls. Overall the mood was upbeat concerning next year as all of the companies we talked to are forging ahead with many new products for 2008. Mattel has solid plans to finally get the sixties era batmobile into our hands during the first half of the year. Norscot has plans for 17 new models including two new vintage pieces. Corgi is even finding solid footing again and is currently working on a full catalog of new releases for the year ahead. As for product safety, we were pleased by how seriously the manufacturers are treating the problem, in fact, all of them have had testing procedures in place for years. The only down side to our conversations were related to price increases. Due to labor, power, and material shortages in China, most manufacturers are expecting at least some price increases next year. In one case we were told to look for increases of up to 15% from some companies on some of their line. In any case, we at 3000toys.com will be working hard to roll out the information as soon as it becomes available.
Posted by Darin - Marketing & Information at 7:53 PM No comments:

Gearbox is back under new owner. We were pleased to be contacted not long ago and told that we would be able to start supplying our customers with Gearbox products once again. It turns out that Gearbox is now under new ownership. We know that several of you were disappointed to find out that Gearbox had closed their doors, so it is great pleasure that we are able to tell you that we will be fully stocking the line again. Over the next couple of weeks, look for the line to be filled back in.
Posted by Katharine - Executive VP at 5:20 AM No comments:

RC2 just announced this morning a recall of 5 more Thomas & Friends Wooden Railway items due to potential lead in the surface paint, and we wanted to get the word out to all of you as quickly as possible. I just emailed to our RC2 rep asking which items were involved, and received an email with the official statement from Curt Stoelting, Chief Executive Officer. We are currently in the process of contacting every customer who purchased any of these items from 3000toys.com. Luckily, we will be able to let them know that the ones we sold were received at our warehouse prior to those which are being recalled. RC2 has both a toll-free number and a website to help with any questions or returns you may have (at the bottom of RC2's quote below). Here are excerpts from RC2's letter:

"On September 26, we are announcing the voluntary recall of five additional Thomas & Friends wooden toys that may have been coated with paint containing potentially unsafe levels of lead. Working in full cooperation with the U.S. Consumer Product Safety Commission (CPSC), we are voluntarily recalling the following affected wooden items, and our records indicate you may have purchased one or more of the following affected toys:

The all-black cargo cars, Toad vehicles with brake levers, olive green Sodor cargo boxes, and the all-green maple tree top and signal base accessories may have been coated with paint containing potentially unsafe levels of lead. Each of these recalled items is from production prior to April 2007:

· The all-black cargo car from the Brendam Fishing Dock Set was manufactured from March 2003 until July 2005, when the set was discontinued from the Thomas line.

· The olive green Sodor cargo box from the Deluxe Cranky the Crane set was produced from January 2006 through December 2006.

Any consumers with questions should be urged to either visit RC2’s web site at http://recalls.rc2.com, or call our Consumer Care Center toll-free at (866) 725-4407 for assistance in identifying and returning the recalled toys. Prepaid U.S.shipping labels are available online for any consumer returning any of the recalled items."
Posted by Katharine - Executive VP at 9:03 AM No comments:

Bonhams, a high-end British-owned auction house established in 1793, will be auctioning off over 570 lots of Corgi first shots,

prototypes, and pre-production resins on October 3rd at 11:00am in Knowle in the U.K. Very nice images are shown for each lot on Bonhams' site. This is a rare chance to get a look at a collection that few have seen before - and a chance to perhaps even own a part of it. While the auction will not be live on the internet, absentee bids can be placed online as long as you have registered far enough in advance.

To go directly to the Corgi auction, you can go here: http://www.bonhams.com/cgi-bin/public.sh/pubweb/publicSite.r?sContinent=EUR&screen=catalogue&iSaleNo=15754
Posted by Katharine - Executive VP at 8:55 AM No comments:

With all the buzz in the media about toy safety, I thought it would be a good time to spot-light one brand in particular that has always been safety minded. A few years ago, we had the opportunity to tour the Bruder factory. Bruder is a family owned company and all of their toys are made right there in Germany. We were impressed not only by how clean and well organized the factory was, but also by how toughtful their design processes were. To start with, everything is produced from a high grade of non-toxic UV protected plastic. The production engineer giving us the tour explained the you could literally eat the plastic material and it would not hurt you. Not that it would taste great, but it would be totally harmless. Additionally, all of the colors are in the plastic itself so no painting is ever needed. Bruder gives a lot of attention to detail and play value in their toys. But they are able to do so without compromising safety with small or dangerous parts. If you have a little person on your gift giving list, I would encourage you to consider a high-quality Bruder toy.
Posted by Darin - Marketing & Information at 9:58 PM 1 comment: 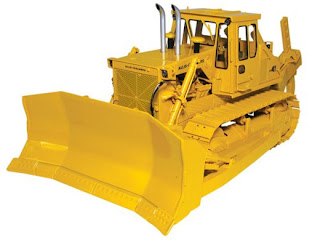 Thanks for checking out our new 3000toys.com blog. We plan to use the blog to share extra information about the models we like and what's new in the world of diecast.

One of my personal interests is old Allis-Chalmers equipment. Before it's bankruptcy in the 1980's, Allis-Chalmers was involved in businesses ranging from farm equipment to power generation and virtually everything in between. In 1969, the Allis-Chalmers construction equipment division introduced the HD-41 dozer. At over 100,000 pounds this massive crawler was the largest production dozer in the world for many years. It was so large that it required special factory equipment to handle it's parts during assembly, and three fully loaded semi-trucks to deliver it to customers.

First Gear is reproducing the HD-41 in a big beautiful 1/25 scale. This replica will be loaded with details and measure 17" in length. This is a model that any collector of fine replicas will appreciate and one that I will be adding to my personal collection as well.
Posted by Darin - Marketing & Information at 8:12 PM No comments:

Hello, and welcome to the brand new 3000toys.com blog! This is where our product managers will be making new product announcements, and sharing the most up-to-date information. We are excited to provide this new service, to keep you updated on all your die-cast needs! In the near future, we will be sharing our favorite products with you: everything from highly collectible construction models, to farm toys and cars for your kids, to WWII airplanes! Be sure to check back as the holidays approach, since we can provide Christmas presents for all ages!
Posted by Maleia - Senior Product Manager at 12:45 PM No comments: