Here's to the Ford Classics!

The Ford Model T is an American icon known for being one of the first automobiles available for the  everyday American.  Eighty-six years ago, the last Model T, affectionately known as the "Tin Lizzie", was produced, ending one era and beginning another with the introduction of the Model A. 
To keep up with innovation, Ford rolled out with the Model A, which was produced until 1931.  While being the Middle-Class American's car, it was also popular with the commercial realm.  Check out this model made by Motor City to deliver your ice cold Coca-Cola. 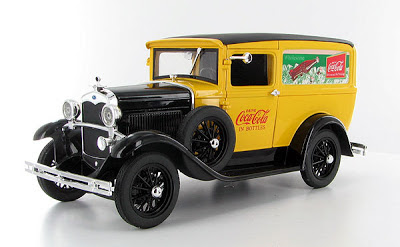