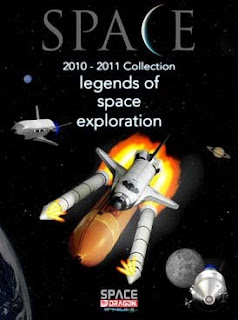 2010 is launch year for Dragon Models incredible Aerospace Program of preassembled collectibles. Lift-off has begun! The Program features exciting and highly popular Aerospace titles, from huge rockets to delicately detailed command modules, in the best collector scales. Rest assured all releases will be “Dragon Quality and Value”, which means premium material in the highest detail priced at the best value in the market. Featured here are some of the release for this year. Check it out and place your orders at 3000toys.com. 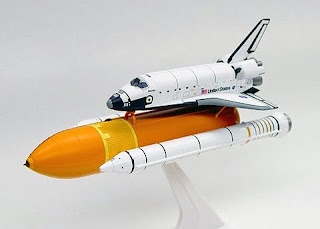 Space Shuttle Atlantis (Orbiter Vehicle Designation: OV-104) is one of the three currently operational orbiters in the Space Shuttle fleet of NASA, the space agency of the United States. (The other two are Discovery and Endeavour.) Atlantis is named after a two-masted sailing ship that was operated for the Woods Hole Oceanographic Institute from 1930 to 1966. Atlantis was the fourth operational shuttle built and was delivered to Kennedy Space Center in April 1985. This model is true to 1/400 scale, is highly detailed and very collectible. Display it on the ground or in flight with the included stand. 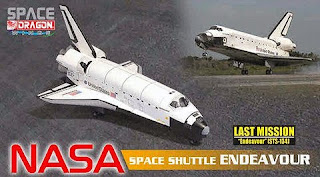 Space Shuttle Endeavour (Orbiter Vehicle Designation: OV-105) is one of three currently operational orbiters in the Space Shuttle fleet of NASA, the space agency of the United States. (The other two are Discovery and Atlantis.) Endeavour is the fifth and final spaceworthy NASA space shuttle to be built, constructed as a replacement for Challenger. Endeavour first flew in May 1992 on mission STS-49 and is scheduled for decommissioning in 2010. Before its decommissioning, NASA expects to use Endeavour for the STS-134 mission, and the last shuttle to fly for the last mission of the Space Shuttle Program. This model is true to 1/400 scale. It is constructed of high-quality diecast and is highly collectible. Includes stand to display "in flight" or leave it on its landing gear. 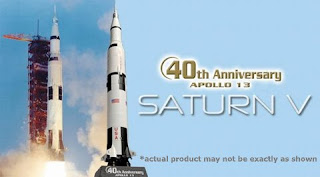 Apollo 13 was to be the third Apollo mission to land on the Moon on April 11 1970, but the mission was aborted after rupture of service module oxygen tank. However, the crew returned safely to Earth on April 17th. It was classified as a "successful failure" because of the experience gained in rescuing the crew. Dragon is launching the 1/400 Apollo 13 Anniversary item to celebrate the 40th anniversary of this historic significance. A perfect addition to your space collection. A celebration of human ingenuity and the bravery of the men who survived this mission.
Posted by Tom - Director of Product Management at 6:33 PM