Corgi's summer releases include these 1/72 scale airplanes ready for display for the aviation and military enthusiast. These are the finest quality die-cast aircraft, carefully researched and crafted with meticulous attention to detail. These models have just arrived and are ready to ship. These are just a few so be sure to go to 3000toys.com to see more of our summer arrivals! 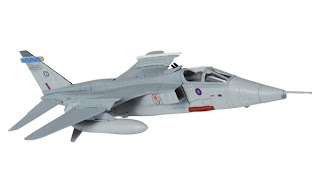 Corgi - AA35412 - Price = $44.95Sepecat Jaguar GR3A - XX738, RAF 6 Sqn, Coningsby, 2007. 6 Squadron of the RAF holds the distinction of being the longest cont- inuously serving Squadron anywhere in the world. Formed on 31st January 1914, 6 Squadron remained operational continuously until 2007, when it disbanded as the last Jaguar Squadron. The model depicted, XX738 represents one of the Squadron’s aircraft as they were typically seen in their final days flying out of RAF Coningsby in Lincolnshire. 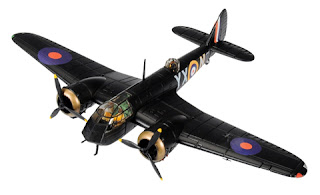 Corgi - AA38403 - Price = $59.95
Blenheim MkIF - K7159, 54 OTU RAF, Summer 1941 - Bristol Blenheim K7159 was originally built in 1936 as one of the first MkI bombers to come off the production line. It was then converted to fighter standard in late 1938 and equipped with AI (Airborne Interception) night fighting radar during the latter part of 1939.This example is shown in the scheme and markings worn while serving with No. 54 OTU (Operational Training Unit) at Church Fenton, Yorkshire in 1941 after its withdrawal from front-line RAF service. Features include additional photo-etched aerials and rotating turret gun. 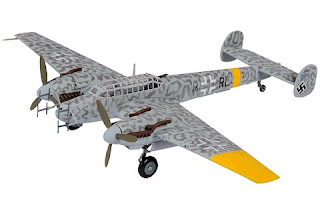 Corgi - AA38504 - Price = $44.95
Messerschmitt BF110G-4/R6 Nightfighter, RAF Museum, Hendon, London - Believed to have been built in 1944, BF110G-4/R6, Wk Nr 730301, was specifically produced as a night fighter and fitted with the FuG220b Liechtenstein SN-32 radar. The aircraft, coded D5+RL, was serving with 1/NJG3 in the night defence of Denmark and Northern Germany when it was surrendered to the allies at Grove airfield in Denmark in May 1945. In August 1973 it was moved to RAF St Athan, South Wales where volunteers completely stripped, restored and repainted the aircraft in a blue/grey scheme with its original codes D5+RL. In 1978 it was transported to the new Battle of Britain Museum at Hendon (now the RAF Museum), where it has been displayed ever since. Model features photo-etched aerials.

Posted by Tom - Director of Product Management at 2:39 PM