New Dragon Armor items have arrived here at 3000toys.com. This line features static pre-assembled, pre-painted models made of both diecast and plastic. Each item is fully detailed and historically accurate. Here are a few.

The Sherman tank saw widespread Allied use in WWII, but its original 75mm gun was inadequate for taking on heavily armored German tanks like the Panther and Tiger. With remarkable foresight the British decided to fit a 17pdr antitank gun, able to penetrate a Tiger I’s frontal armor at 1000m, to the Sherman. Thus the Firefly was born, with approximately 2200 eventually produced. Most Fireflies were adapted from the M4A4 and were known as the Firefly VC (“C” denoting the 17pdr gun), while a smaller number were converted from the older M4 and were called Firefly IC. This is Dragon's first ever Firefly Ic. Based on the Sherman I (M4). This is sure to be popular and very collectible. This model is true to 1/72 scale and is painted in a standard green camouflage scheme, the tank is finished in the markings of a Polish Firefly from the 2nd Squadron, 1st Krechowiecki Lancers, 2nd Armoured Brigade, of the 2nd “Warsaw” Armored Division. Item# 60367, $17.95


Initially designed as a sup 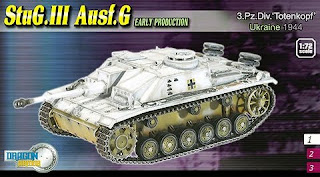 port weapon, the StuG III interestingly turned out to be the most widely produced German armored fighting vehicle of WWII! Cheaper than the Panzer III tank it was based upon, a total of 10,619 StuG IIIs of all types were eventually produced. The StuG III had accounted for an impressive 20,000 destroyed enemy tanks by the spring of 1944 alone. The most common variant was the Ausf. G, which also happens to be the subject of a new release from Dragon Armor. Item no. 60312 represents an Early Production Ausf. G of the “Totenkopf” (the name translates as “death’s head” or “skull”) Panzer Division. The model is expertly assembled, and is replete with the type of amazing detail found on Dragon’s acclaimed plastic kits. This fully finished model is painted in a most dramatic winter-whitewash scheme, which only adds to its impact. The upper hull still wears a reasonably fresh coat of white paint, while the lower hull shows traces of its original sand-yellow base coat. This vehicle is a real combat veteran, as evidenced by the “kill marks” on each side of the superstructure. Manned by an experienced crew, this StuG III has accounted for more than its fair share of enemy tanks. This new miniature vehicle is filled with character - and color – and would be an asset in any collection. Item# 60312, $17.95 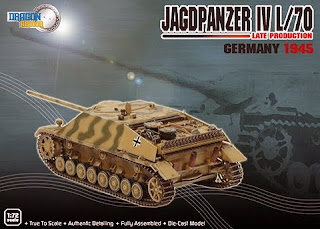 The Jagdpanzer, with its low profile and powerful 75mm gun, was an ideal German anti-tank weapon to be used against the Allies and Russians as they pressed in on the Fatherland. The Late Production model, because of the heavier gun, was nose heavy, and so the front wheels had steel rims rather than rubber, as the rubber wore out too rapidly. The Jagdpanzer IV was sometimes given the nickname of “Guderian’s Chicken”, and muzzle brakes were quickly deleted because with the gun barrel being so close to the ground, great amounts of dust were kicked up upon firing. This is the first Jagdpanzer IV by Dragon! This model depicts a vehicle fighting in 1945 in the defense of Germany, with a very realistic two-tone camouflage paint scheme that is also authentically weathered. Also included are other appropriate late production features such as the correct return rollers and the modified rear exhaust system. Features include historically accurate and weathered 2-tone camouflage paint, detailed and weathered track links, and includes a display case. Item #60232, $13.95
Posted by Tom - Director of Product Management at 4:38 PM