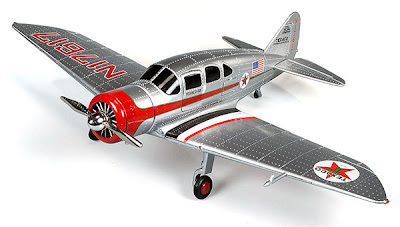 This New model has a lot of great features that you will enjoy, including:

Round 2 has done a great job at replicating the 1935 Spartan Executive 7W T68. The actual plane is the sixth of seven Spartan planes employed in the Texaco Fleet. Texaco purchased it in 1950. An earlier version, the T51, was also used by Texaco and is #14 in this series.

Manufactured by the Spartan Aircraft Company in Tulsa, Oklahoma, the Spartan Executive 7W was a well-known and popular aircraft. While born in the middle of the Great Depression, it was designed for comfort and speed for the wealthy.

The interior was large and spacious with a number of trend-setting features including: arm rests, ash trays, cabin heaters, ventilators, deep cushions, and large windows. The Spartan Executive 7W was popular enough to see design replications continue with design replications well into the post-World War II period of aviation.

Visit our website to order your Wings of Texaco Airplane Series #21 while supplies last!