3000toys.com is excited to introduce a myriad of new items from Eligor hitting our site this month. These France-based, die-cast models are 1:43 scale and finely detailed.

Also known as the “Berlinette”, the A110 was a sports car produced by the French manufacturer Alpine from 1961 to 1977. After becoming famous for its victories as a rally car, they introduced the A110 1600S with an aluminum block engine which could reach speeds of 210 km/h (130 mph). The 1973 model was famous for becoming the first World Rally Champion. 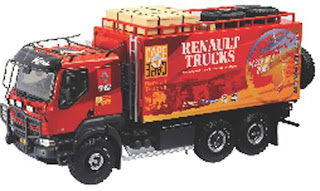 The Renault Trucks adventure began on the 1st of March in Northern Cape and ended on July 8th, 2009 in Cape Town, South Africa, covering 21 countries. During this journey this Kerax truck demonstrated its robustness and reliability under the most extreme conditions. This product is very accurate with excellent detailing.

The Renault Magnum is the flagship model of Renault Trucks, which is available in semi and rigid configurations. Both configurations can be bought with a 6×2 or 4×2 drive train. First launched in 1990, the Magnum was awarded the "International Truck of the Year" in 1991. Featuring the “ING” Logo on the trailer, this model is high quality and very detailed.
#113990

Highlighted are just a few of the new releases, please visit 3000toys.com to check out the rest of the spring release.
Posted by Maleia - Senior Product Manager at 3:52 PM