A View into the Life of Mr. Hot Wheels

Did you grow up with Hot Wheels?  Are you still collecting Hot Wheels?

One of the first and greatest designers of Hot Wheels was Larry Wood, also known as Mr. Hot Wheels.   Larry has been a car guy since he was 15 years old and had a passion for drawing all sorts of cars especially hot rods for his buddies in school.

When he grew up, he worked for Ford and then later got his dream job at Mattel where he became known as Mr. Hot Wheels.  He designed Hot Wheels for more than 40 years and continues to do consulting work.

He now has his own garage, known as Elwood's Garage, where he does his own personal work and houses his collections, including his cars and models. Hot Rod did an interview, shown below, with Larry talking about his life long love of hot rods and drawing.

Just as Larry talked about during his interview, he has kept himself busy after retiring from Mattel, still designing his masterpieces.  Here is one of his designs that he created himself to use to go on vacation.  He used a 1938 COE truck and a trailer he found in  Michigan and completely reworked the whole thing. It is definitely a unique piece of ARTwork! 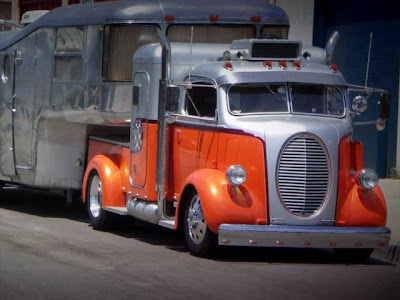