The 2010 Wings of Texaco Planes are HERE! Many of you have already ordered yours, and they have shipped out or will very soon. If you haven't ordered yet, make sure to soon!

We have received only the Regular Edition yet; the Special Edition planes are due to arrive next month. 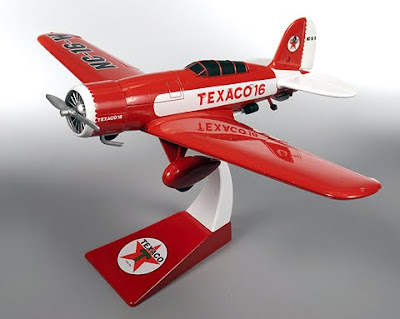 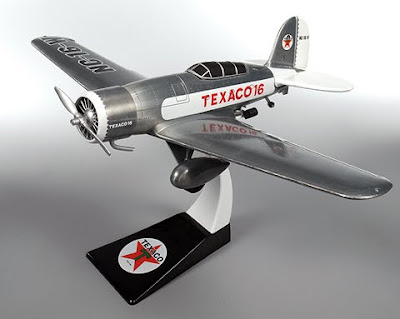 To see all the planes in the Wings of Texaco collection, click here.
Posted by Unknown at 4:48 PM No comments:

Email ThisBlogThis!Share to TwitterShare to FacebookShare to Pinterest
Labels: 1/48, airplanes, planes, round 2, Texaco, Wings of Texaco

Fourteen new items from Tonkin just arrived last week! We are excited to be offering these for sale and immediate shipment now. These are great new items for an already existing collection, for a new collection, or for the fast approaching Christmas season! These are all cast in 1/53 scale; here's a look at a few: 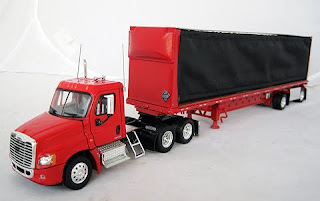 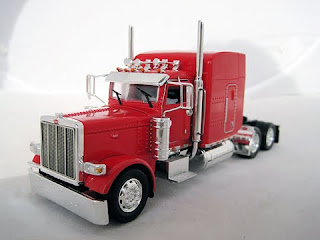 Posted by Unknown at 1:20 PM No comments:

We are excited to announce three new releases from M2Machines, including an all-new series, Auto-Project! These 1/64 scale models go for $29.95, and will be ready to ship out to you in the next several weeks!

These high-quality models feature incredible detail as never seen in 1/64 before (especially at this price-point) with small production runs. These come in factory-sealed cases for your chance to find M2Machines' very rare chase cars and limited edition cars inserted into cases at random. 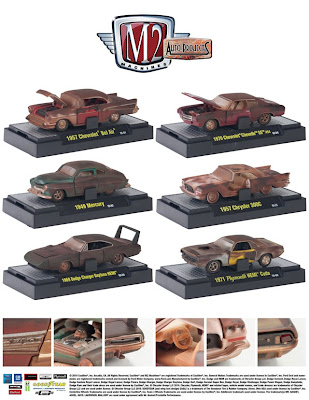 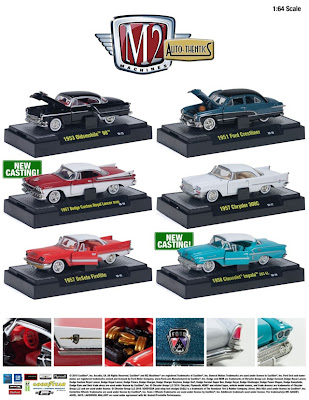 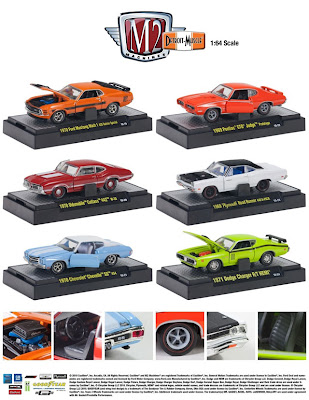 Posted by Unknown at 3:04 PM No comments:

I just added to our website the newest models from GreenLight, which they worked directly with Ford to produce - the 2010 Ford Taurus SHO! This item comes in 1/24 scale and a variety of popular colors. Additionally, this item is being produced in limited quantities, so make sure to get your pre-order in soon! They are due to arrive in November or early December, just in time for Christmas! 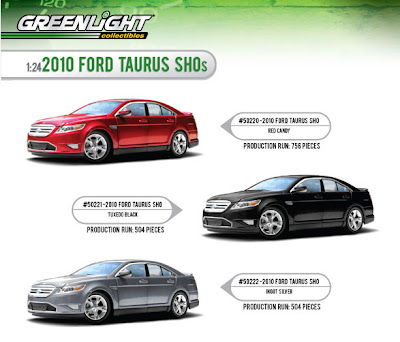 Posted by Unknown at 2:00 PM No comments:

Norscot has recently made an announcement regarding their fourth quarter releases. Scott Stern, President/CEO of Norscot Group, recently announced 4 new Cat Scale Models.
"I am pleased to introduce the newest additions to the Norscot line, the 'Core Classics,' These specially selected items are four of the most popular scale models Norscot has ever produced."
These 1:50 scale models are nicely detailed and work great for O scale layouts. Find these and more at 3000toys.com. 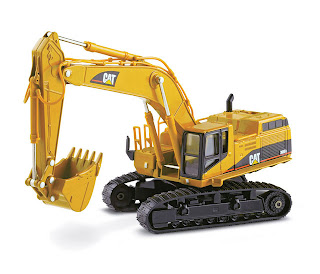 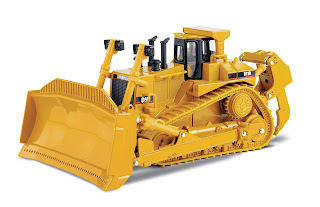 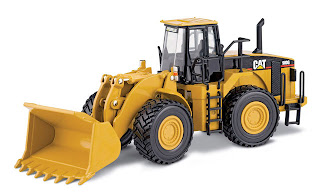 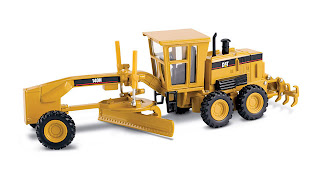 These lovely Texaco Fire Engines were just announced Monday, and are now available at 3000toys.com for pre-order. 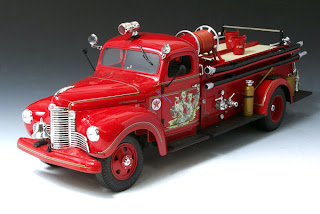 Each die-cast replica, in this ongoing limited-edition series, is manufactured with exquisite detail, high-gloss finish and meticulous craftsmanship that is always present with the Die Cast Promotions and Highway 61 brand of replicas.
Posted by Maleia - Senior Product Manager at 7:00 AM No comments:

We have finally received the Oshkosh® HET's from Sword, manufacturer of highly detailed museum quality replicas. They are ready to ship now and are going fast, so make sure to get your orders in soon! The HET (Heavy Equipment Transporter) is in 1/50 scale and is available in Camouflage and in Tan. 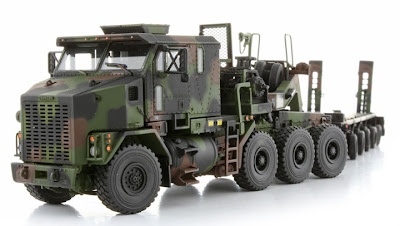 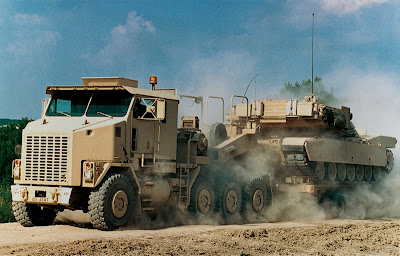 It's time to vote!

We've had a really great time with the 3000toys.com Flat Fred contest this summer, and now it's time to vote for the best overall! You may vote once every 7 days, and the winner will be announced on November 1st. To see all the contestants, plus our monthly winners, click here.
Posted by Maleia - Senior Product Manager at 3:57 PM No comments:

Founded in 1926, Bruder Toys is one of the largest family owned and operated manufacturers of high quality toys. Located in the small town of Burgfarnbach in Southern Germany, the family business currently employs over 350 local townspeople and operates a factory with 368,000 square feet. In an extremely competitive marketplace, Bruder Toys refuses to use labor exploitation. Bruder has innovated top computer operated machinery and robots, making it possible to maintain all manufacturing and reliability tests in-house. Going into its ninth decade, Bruder Toys continues its commitment to remain one of the most reliable, specialty toy manufacturers in the world. We at 3000toys.com are very  proud carry these high quality toys. Here are the newest arrivals. 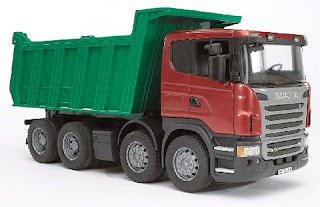 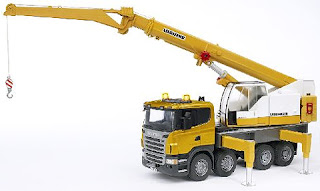 Within the past couple weeks, we've added 33 brand new items from GreenLight to our site, many of which should be arriving within the next few months. GreenLight manufactures authentic die-cast replicas of cars and trucks. Here's a look at a few of the new items: 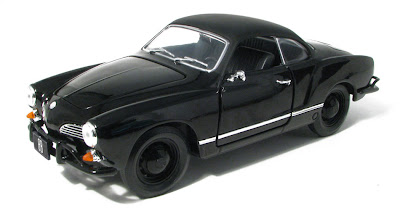 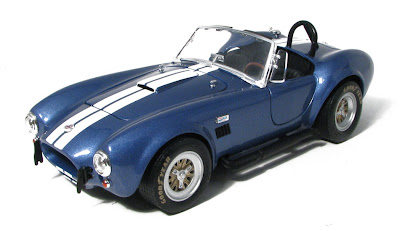 As an added bonus, GreenLight and Mecum are offering something new to collectors for this release. Look for randomly inserted "Mecum Sold" stickers that are autographed by Mecum owner Dana Mecum and television color commentary car expert John Kraman.

These are the same stickers that are applied to the windshield of every car that sells at a Mecum auction. The autographs will be extremely limited so they will undoubtedly be highly sought after!

You can visit our website at 3000toys.com or click here to see all the new GreenLight additions.

Posted by Unknown at 1:32 PM No comments:

Since we deal in fire and emergency equipment models, I thought it would be fun to witness some actual fire department related news. I found out on Monday that our Joplin Fire Department was initiating a 2010 Pierce Velocity with 100-foot ladder the following day. It so happens that the event was taking place right after I got out of my class that morning, so Katharine was nice enough to let me go and take pictures for you!

You can check out some video footage of the event at the Joplin Globe Online.

I honestly didn't expect this event to be so entertaining. I thought I'd snap a couple pictures and then be on my way. But it was more than just presenting a new fire truck. It was an actual ceremony, complete with rituals that are apparently shared with other fire departments.

Closeup of all the dials and switches. I have no idea what any of this does: 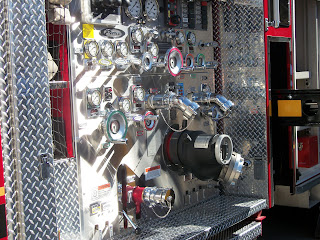 You can see the one they retired behind the new one. The old one was made out of steel, which required painting and upkeep so it wouldn't rust. The new one is made of aluminum, which will not rust or lose its color. 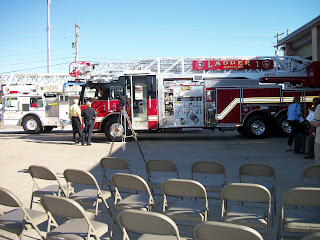 Transferring the water from the old model to a new one is part of the tradition: 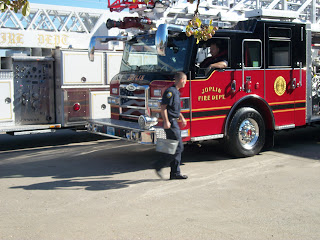 Another tradition: wetting the wheels. I missed the explanation of this, but I think it's to test the tread of the wheels. 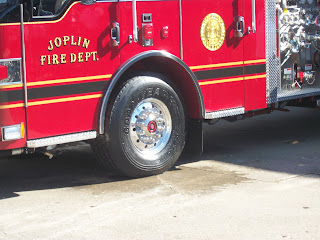 It's beautiful, isn't it? I love red and black together. 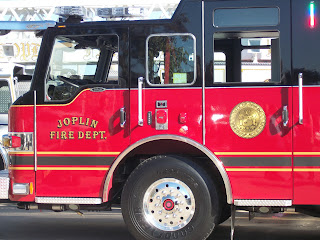 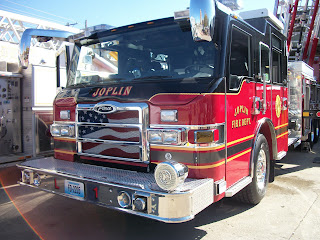 Those are two lamp-hatted miners holding the Elizabethan shield. The miners names are "Dexter" and "Sinister." I'm not making that up. The emblem features bars of zinc and a royal crown. Over the shield is the arm of a miner with his pick-ax in hand, and under is a ribbon stating "Zinc is King." Yeah, we were all about mining. We have the chat piles to prove it. 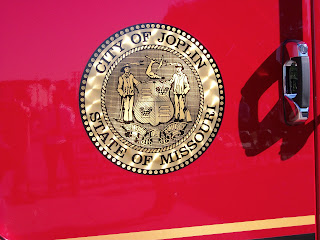 This was a really neat way to get an up close look at the apparatus that our models recreate. The tradition and ceremony were fascinating. Do any of my readers know some other rituals that are observed around the country, or even worldwide? I'd love to compare what we do.
Posted by Maleia - Senior Product Manager at 3:00 PM No comments: