This is the Valtra N Series 121 Kommunal Tractor from Universal Hobbies in 1/32 scale, and I just recently worked on a video demo for you.  I'll show you the in's and out's - way better than just a picture! 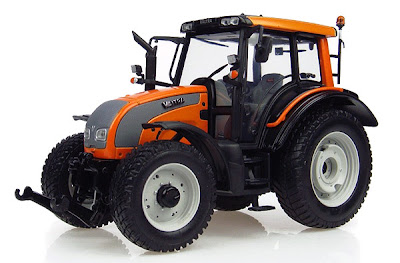 http://www.youtube.com/watch?v=PA-RPzEMovM&feature=plcp
Posted by Unknown at 7:30 AM No comments:

... at least to take part in this fantastic [excuse me, SUPER!] sale we're having.  It ends Friday, August 31 - that's tomorrow, so don't miss out!

Posted by Unknown at 3:17 PM No comments:

Email ThisBlogThis!Share to TwitterShare to FacebookShare to Pinterest
Labels: Sale

Tractors so fancy we call them prestigious:

ERTL does a great job with these. They've got a high level of detail, with the features ranging from die-cast wheels with soft tires to the window "glass" with console lever detail, from the mirrors to the detailed gear shift levers, and much more. 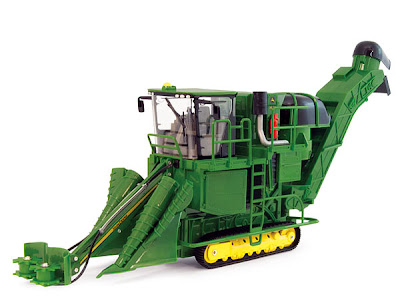 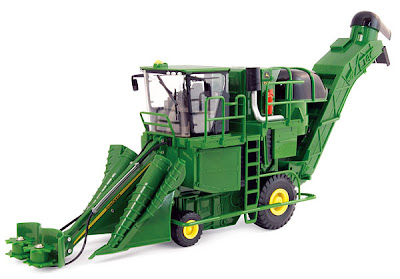 Posted by Unknown at 2:25 PM No comments:

I just got done adding more than 50 new Scratch & Dent models to our website.  Check them out by clicking here.

I'm always trying to think of uses for the items in this section of our website... like a junk yard or mechanics diorama... a load on a trailer... a sandbox toy for your kids...

Then Wawan posted a picture on our Facebook page (click here to go there) that added something else to that list - I think it's a fantastic idea!  I have to show you. 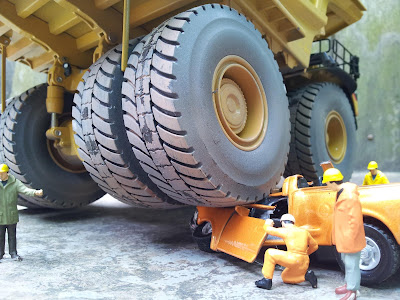 And, of course, there are also model in the Scratch & Dent section that just have bad boxes (click here to see just those).  The models themselves are still great for display.


Tonkin Replicas called today to let us know they now have a Caterpillar scale model license.  They are planning 10-11 Caterpillar models with a target release date of "Summer 2013"
Plans for model production are very preliminary at this point.  For their Summer 2013 releases, Tonkin is already working with Caterpillar on three (3) models in 1/50 scale. They will also be building 1-2 models in 1/64 scale and 6 models in 1/87 scale.

THIS IS YOUR OPPORTUNITY TO BE HEARD...  they have asked us to collect your feedback & recommendations for what machines you believe would work best for their first releases.

Posted by Katharine - Executive VP at 6:17 PM No comments:

We are having a sale for the rest of this month! One might even call it a Super Sale... nearly 500 models at up to 70% OFF regular prices.  Sounds pretty super to me.

Posted by Unknown at 2:55 PM No comments:

Anyone else excited about the Caterpillar Visitors Center?

This October, Caterpillar will be opening their brand new Visitors Center in Peoria, Illinois.  This is an interactive, hands-on opportunity to "experience" the story of the building of such a great business and line of machines, from learning about the people who formed the company to exploring the actual machines!! 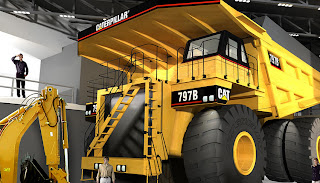 "Come face to face with an authentic 1930s D8 tractor and feel for yourself what it was like for an operator to keep it moving. Then experience the contrast of operating a modern-day machine in one of our state-of-the-art simulators.

"Feel the rumble in your seat as you descend into a Caterpillar customer's mine site as a passenger in a Cat 797 Mining Truck...

"Visit the center and step into the Immersive Visualization Theater to see how virtual reality is used to develop the smallest details on all Caterpillar products. 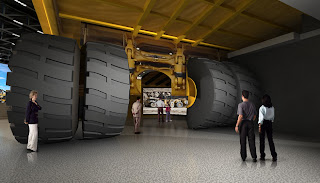 "Then feel the sheer magnitude of the 24-foot-tall Cat 797 Mining Truck, as you stand next to the one of its six-ton tires or sit in its 380-ton capacity haul bed."

The center also highlights Caterpillar's history with moments like constructing the Golden Gate Bridge to widening the Panama Canal, from powering the Apollo 11 mission to building fairgrounds for the World's Fair and the Olympic Games.

Visiting this place is definitely on my bucket list!  If any of you have a chance to visit it, please share your experience, and if I get to go, I will do the same!
Posted by Unknown at 9:30 AM No comments:

Many models from NZG are being restocked NEXT WEEK!  Make sure to be checking on our website for the availability of these models.

My favorite of those that are coming next week is the Hamm GRW280 roller.  Check it out:

It's got rubber rotating wheels, an enclosed cab, and comes in 1/50 scale.

Order now, and we will be able to ship this right when it comes next week!  Browse the whole line of NZG models by clicking here.
Posted by Unknown at 8:30 AM No comments:

A reduced-stress holiday season sounds good to me. You??

I know that soon we will start seeing Christmas displays up at Hobby Lobby and Walmart.  It always feels too early, but I guess it's because I don't plan that far in advance.  This article makes me want to be a holiday planner this year, or at least more so.  It's a game plan for a stress-free (or, reduced stress) holiday season.  Sounds pretty good, right?

The best gift you can give yourself this holiday season is to start your preparations well in advance. Although reminders about holiday shopping seem to arrive earlier each year, the lack of an actual plan can mean little gets done until the last few stressful weeks.

To make your holidays merrier—and less stressful—here’s a master plan:

September:
Once life gets back on track after the summer vacation, start to make some lists. Who will you send cards to? Who are you buying gifts for? Ask family members where they plan to be for the holidays. This time also offers a great opportunity to browse through the stores that you’ve always meant to visit.
---[more]---

Posted by Unknown at 9:12 AM No comments:

We just received a variety of trucks from New-Ray that you'll want to know about! There are several in 1/32 scale, a couple in 1/43 scale, and also one in 1/24 scale.
Click on any of the images or item numbers below to see more information on our website, or don't hesitate to let me know if you have any questions! Posted by Unknown at 2:30 PM No comments:

Here's my demonstration of the Caterpillar 24M Motor Grader from Norscot.

Norscot's model measures a massive 13 inches long, weighs more than two pounds, and includes a wide array of features.  I'll tell you all about them here:
Posted by Unknown at 7:00 AM No comments:

These NEW models from First Gear will be getting here next week!  Order yours now so that we can ship as soon as they come in. 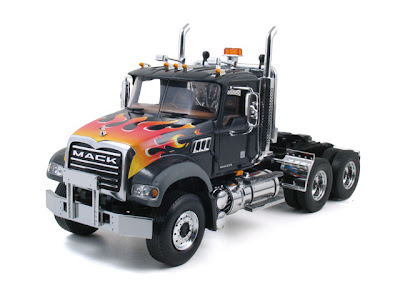 Personally, I think this is going to be one of my new favorite models.  The paint job is super cool, it's a beautiful truck, and I know First Gear will do a good job with the details.  I definitely wanted to get my hands on it, so we'll be doing a Details that Matter (what's that? click here) publication a couple weeks from now, and hopefully a video demo (those too?? click here) in the near future. 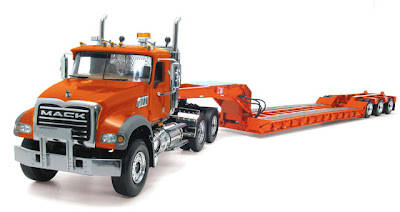 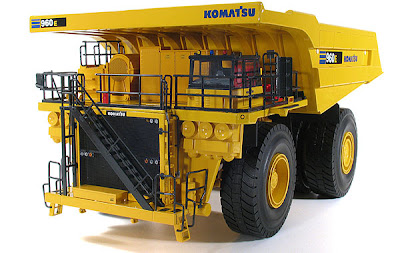 Everything MINING will be at MINExpo 2012

MINExpo 2012, held in Las Vegas' Convention Center on September 24-26, will be THE place for everything going on in the mining industry.

And of course, you couldn't have something like this without Caterpillar.  Take a look at their awesome preview video!  (It's got good music too.)

First Gear has been one of the top manufacturers of die-cast collectibles since they opened their doors 20 years ago.  Throughout the years, they've faithfully maintained their reputation of unsurpassed quality and dependibility.


These new collectibles from them will not disappoint!

Coming soon THIS FALL are 4 brand new releases. You don’t want to miss out on these! Click on any of the images or item numbers for more details on our website. 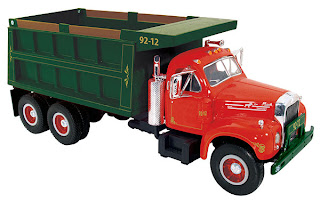 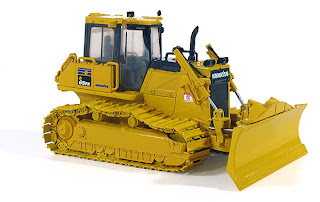 I remember several years back when my younger brothers would play with this particular Bruder Jeep for hours.  Even with their rough play, that thing was around for a long time.  My brother Jacob especially really liked Bruder toys when he was younger.  There was a time when my parents would have to work hard to keep him away from the warehouse, because if he got in, he was bound to end up with several Bruder boxes opened up, playing with the cars and trucks on the floor.

Those days are gone, but Bruder is still one of my favorite brands that we sell.  All their toys are made of high impact ABS plastic, which is fade-resistant and doesn't break very easily.

Sand-box season is still in full-swing, or these toys are great playthings any time of year.

On top of all the classics from Bruder, like the Jeeps my brothers used to play with, we have just received several new sets and figures from Bruder.  Check them out!  Click on any of the pictures or item numbers to find out more. 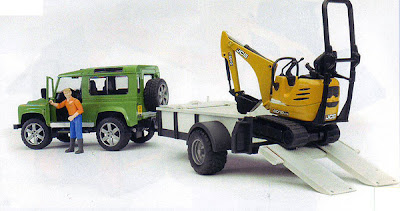 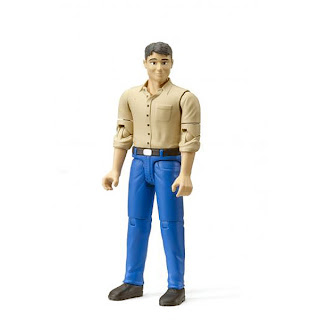 Male Construction Worker with Dark Hair
Bruder #60001 - 1/16 Scale
Moveable limbs and head, hands that can grasp objects or hold onto vehicles, and it is made from High Impact ABS Plastic 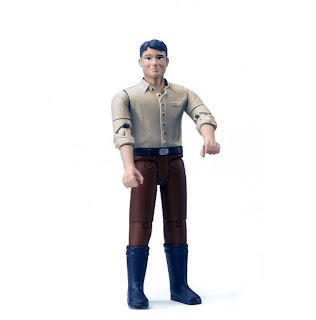 Male Construction Worker with Dark Hair and Boots
Bruder #60011 - 1/16 Scale
Moveable limbs and head, hands that can grasp objects or hold onto vehicles, and it is made from High Impact ABS Plastic 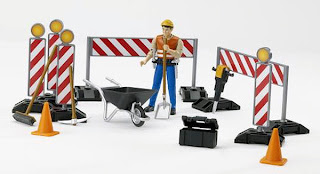 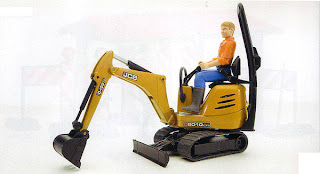 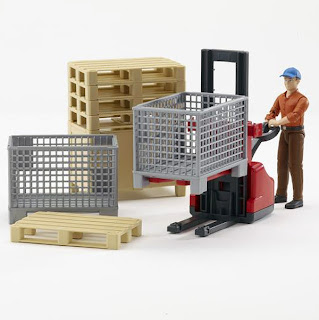 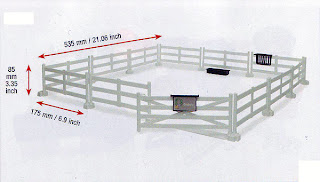 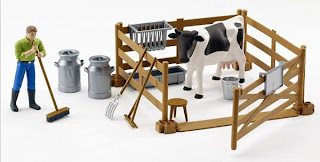 Farming Set - Complete play environment with cow and paddock
Bruder #62600 - 1/16 Scale
Some of the features in this set include Rake, Pitchfork, Besom, 2 Milk Churns,
Bucket, Milking stool, Feed trough, hay rack, and name plate,
Figure features moveable limbs and head and hands that can grasp objects or hold onto vehicles 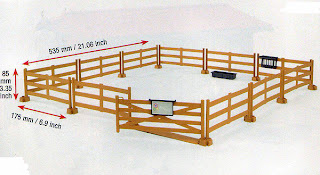 Posted by Unknown at 2:30 PM No comments:

The Caterpillar CT660 is the first of its kind, the first-ever on-highway truck from Caterpillar.  It was introduced at Con-Expo in March of 2011, and after an extremely successful past year, I'm going to show you the in's and out's of this beautiful truck. 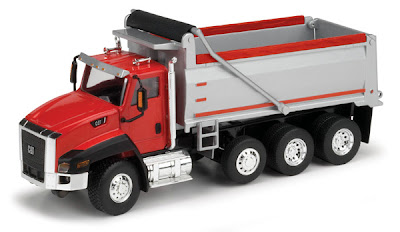