The time has arrived; it's time to put up that new calendar, write out your goals and resolutions, and reflect on the last year that has flown by. For me, a good deal of that reflection is over the amazing models we've seen this year. Will you come with me on this journey?

DCP has an unrelenting drive for excellence in minutiae. This Peterbilt 389 bares that out well.

Our friends at 3D To Scale made quite a splash with this cattle guard in 2015. Plus, they manufacture in the good ol' USA!

The Hot Wheels Elite team at Mattel decided to show off with this brilliant tribute to Adam West's Batman in 1/18 Scale. The Batmobile never looked so good.

It would be dereliction of duty to forget the homage Norscot paid to Bobcat with this Peterbilt 379.

GreenLight has been on point with licensing this year. From Breaking Bad, Fast and Furious, and Gone in 60 Seconds to what they have just announced - Once Upon A Time, Lost, and the Walking Dead - GreenLight never fails to impress. This 1941 4X4 truck is no exception to that rule.

There's nothing like watching a quadtrac tractor glide across a field. Thanks to ERTL, you can glide your own quadtrac across your carpet.

All these great models are in stock now. Pick one up at 3000toys.com and consider it a souvenir of 2015. Happy New Year!
Posted by Unknown at 5:03 PM No comments:

New-Ray Toys was established in 1987, and they have been making a wide variety of models and toys that are great for children and adults alike. These NEW additions have just arrived here at 3000toys! We are excited to share this fun, detailed collection of 1/6, 1/10, and 1/12 scale dirt bikes with you.
While these may not be the real thing, they will still be great for gifts and for your own amusement! Make sure to place your orders at 3000toys.com today to receive the various dirt bike models that you like best.

Posted by Toy Master at 3:17 PM No comments:

Christmas is Upon Us!!!

The weather outside isn't frightful yet (it's 60 degrees and sunny in Southwest Missouri), but it is beginning to look a lot like Christmas nonetheless: there are toys in every store. Hopefully you're wrapping up your Christmas shopping, 'cause Santa Claus is coming to town. However, if you still have some shopping to do, and you're not looking for turtle doves and golden rings, we can help! After all, who would rather have a sugar plum than a CAT D11 Bulldozer? For that matter, who even knows what a sugar plum is?

It may be too late for Christmas delivery unless you want to upgrade to Overnight Air, but a late CAT D11 is better than on-time sugar plums in my book. And you don't need reindeer, just go to 3000toys.com to place your order. Have yourself a merry little Christmas!
Posted by Unknown at 1:21 PM No comments:

Jada has just announced several NEW models based on the Batman V Superman: Dawn of Justice movie coming out in March of 2016! See below some of the diecast metal figures of the key characters and the Batmobile that are set to arrive in January/February. Who will you support?
Place your preorders at 3000toys.com today to ensure that you have these great items for your collection!
Posted by Toy Master at 4:33 PM No comments:

‘Twas the week before Christmas, and all across the world
Throngs of people were excited, their Star Wars fandom unfurled.
Families lined up and waited in the cold
To see if the new movie was as good as the old.

The children were nestled into their seats with care
with popcorn and soda and theater fare.
The lights went down, the movie got started.
All cell phones, texting and chatter departed.

When out in space there rose such a clatter,
Yoda sent Jedi to see what was the matter.
And Darth Vader in his Tie Fighter and Boba in Slave 1
Showed that the Empire would not run.

And what to their wondering eyes did show up?
But Leia, Han, and starships that blow up!
With Kylo Ren in his ship and Poe in His X-Wing,
the Star Wars excitement was in full swing.

With a new director, so lively and smart,
I knew in an instance, it was a good start.
All the characters gathered, none were ashamed,
JJ Abrams directed and called them by name:

The family left the movie, their brains did not
“We must find Star Wars toys!” they thought.
“To 3000toys.com we shall go, to find Mattel models aplenty!
When I finally find them, I must buy twenty!” 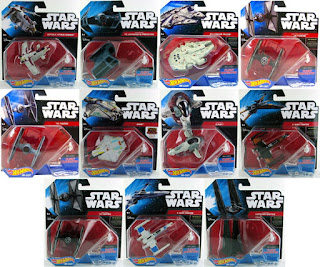 The family received their models, the children all cheered.
There was no sadness or gloom, not a frown or sneer.
The prequels are forgotten, the dark side defeated by the light
May the force be with you all, there’s not a Jar Jar in sight.

Up to 75% OFF During the CHRISTMAS SALE!

If you are anything like us, you can't believe that Christmas is only 8 DAYS AWAY! It is a very exciting time, and we're all bumping up against the final days to get those last-minute gifts for Christmas. With that in mind, we just launched our Christmas Sale! Here are a few of the brands that are on sale now: 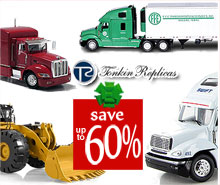 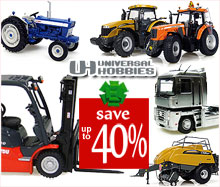 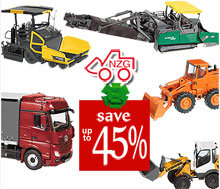 There are 750+ items on sale from over 25 different manufacturers - farm toys, semi-trucks, planes, construction equipment, military, cars, and more are all available with discounts up to 75% on some items! Be sure to visit 3000toys.com and place your order today to get it in time for Christmas!

Posted by Toy Master at 3:08 PM No comments:

Live on either COAST? Orders due today at 3:00 Central Time!

Live on either COAST?
Orders for Christmas items are due today at 3:00 Central Time
if you want UPS Ground shipping! 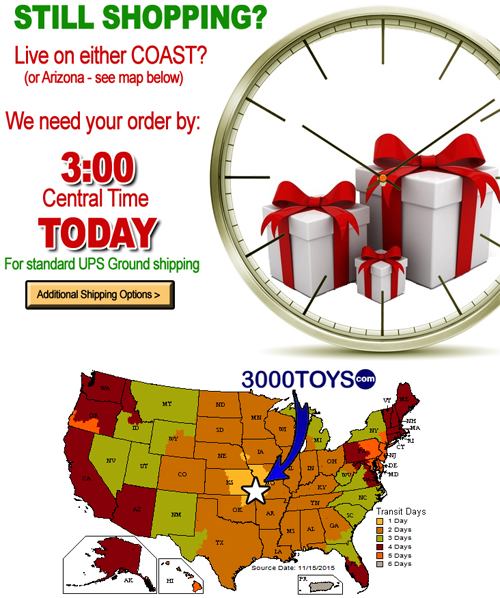 Posted by Katharine - Executive VP at 11:54 AM No comments:

First Response Replicas specializes in true-to-life emergency vehicles in 1/43 scale. They offer a wide variety of makes and models as well as an impressive selection of department markings and badges. We have just received 20 additional models from First Response. Check out a few of them below and pick one up for Christmas before it's too late.
Want to see more? Head over to 3000toys.com and check out our whole selection of First Response models. For more emergency vehicles, take a look at GreenLight, Wiking, Eligor, Herpa, and First Gear.
Posted by Unknown at 5:18 PM No comments:

There's still time to get that perfect gift on your list!

It's not too late.
Click the clock to wrap up your shopping today! 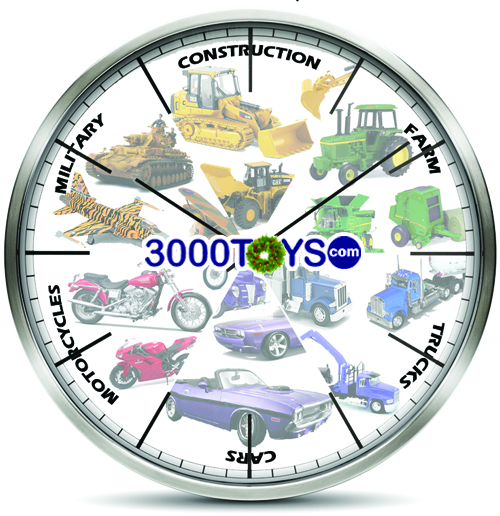 Order by NOON Central Time on Friday for
delivery by Christmas within the Cont. U.S.*
And, remember the
BIGGEST SALE OF THE YEAR
continues through tomorrow night!

*UPS ground delivery times are not guaranteed during the Holiday season
Posted by Katharine - Executive VP at 1:29 PM No comments:

The Walking Dead Lurches Onto Shelves

Within the last 5-10 years, American culture has become saturated with post-apocalyptic zombie movies and TV shows. Chief among these has been AMC's The Walking Dead. It tells the story of a group of survivors continuously on the run from hordes of ravenous, flesh-eating "walkers", more popularly known as zombies. This story connects with us because the scary things aren't the walkers, but how people change and what they do when in awful situations. In short, the walkers are not really evil.

I contend that zombies are simply bored and eat all the time because they are bored. Obviously, they need a hobby. Calligraphy requires too much hand-eye coordination, they would be unlikely to find a partner for ballroom dancing, and groaning goes over poorly in barbershop quartets. Collecting models would probably suit them well. Perhaps ones like these GreenLight models from The Walking Dead.

While these are not scheduled to be released until Spring 2016, it is not too early to get excited about adding these to your collection. Go to 3000toys.com and pre-order yours today. While you are there, be sure to check out other pop-culture replicas from Mattel, American Muscle, and Jada Toys. If we're lucky, these models will help prevent the zombie apocalypse.

Posted by Toy Master at 1:00 PM No comments:

Don't get STRESSED OUT! We're here to help!

You don't have to get stressed out this holiday season.
We're here to help! 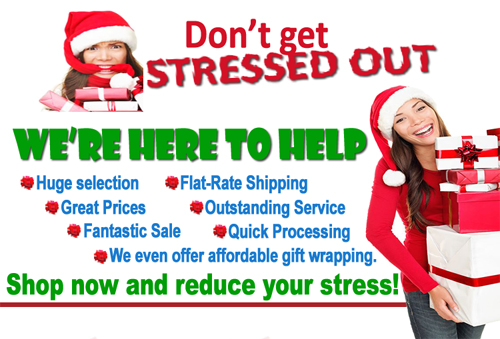 Posted by Katharine - Executive VP at 9:00 AM No comments:

70+ Items ON SALE for the First Time - ENDS WEDNESDAY

Christmas is a very special, and sometimes hectic, time for all of us. So, with the holiday rapidly approaching, we wanted to help out by placing a BUNCH of items on sale for the FIRST TIME! Check out a few of these models from some of our favorite brands: 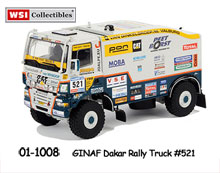 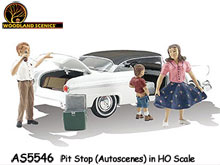 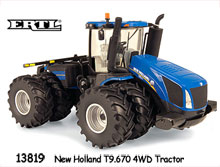 There's plenty more where those came from! So, whether you are shopping for the hardcore collector in your life or want some new pieces for your collection, we have you covered this holiday season. Visit 3000toys.com to check out the rest of these items before they're gone!

Best. Gift. Ever. and with HUGE Savings during our Biggest Sale of the Year! Hurry.  Items are selling out quickly.
Prices good through Wednesday or while supplies last.
Posted by Katharine - Executive VP at 10:50 AM No comments:

One of the things that sets long-lasting hobbies apart from hobbies that pop up and then flame out is choice. In fact, you can often tell if a hobby has staying power based upon little more than the amount of options available. Collecting models has been a hobby for decades now, and the power of choice is one of the things that has kept it going up until now and that will keep it going into the future.

Here at 3000toys.com, we are excited to announce that we are now carrying Motormax! Motormax was founded in 1997 and since then it has specialized in manufacturing highly-detailed, officially-licensed collectible die-cast models. We specifically carry items from two of their lines: American Classics and Die-cast Collection. Here is a small sampling of what to expect:

As these above models show, Motormax is a great option for your collection, and we are proud to carry it. Give the rest of our Motormax items a look, as I am sure you will find something that you, or someone in your life, will cherish. If you want to stay up to date with our Motormax releases, or any of your other model needs, be sure to like us on Facebook and follow us on Twitter!
Posted by Toy Master at 10:00 AM No comments: