Once again, M2 does it right!

In the last 2 weeks or so, M2Machines has made several new product annoucements, most of which will be hitting our warehouse this month. These are all packed with the attention to detail that M2 is known for, and each release is so original and fresh! 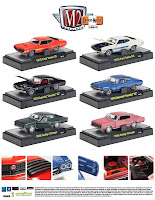 Here we have the 7th release of the Detroit Muscle series. Included in this set will be 2 colors of each car: 1970 Ford Torino GT, 1970 Chevelle SS396, and 1966 Dodge Charger. The chase car in this release will be the 1966 Dodge Charger, in Black with Gold Trim. There will also be a chance at the ultra-rare chrome 1970 Ford Torino GT. As always, we will start out by offering these in factory sealed cases, the contents being untouched by our hands. This way you will know for certain that you have a good chance at a chase car, which will be found in 1/8 of the cases we ship. 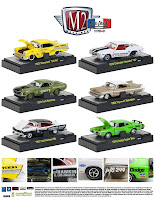 Next up is a brand new series, called the Auto-Drag. These will feature drag strip race cars from the 50s, and muscle cars of the 60s and 70s, all with the graphics of automotive sponsors of the time. Also part of the package are period-correct tires and racing wheels. Included in release one will be 1957 Chevrolet Bel Air in Bright Yellow, 1970 Chevrolet Chevelle in White, 1970 Ford Mustang in Medium Lime Metallic, 1958 Plymouth Belvedere in Canyon Gold Metallic, 1970 Dodge Super Bee in Sublime Green, and a 1957 Ford Fairlane 500 in Black and White. The chase car of this release will be a 1957 Bel Air with Mr. Gasket graphics, rather than the traditional black and gold chase version.

And finally, we have the Flames series, also in mid-scale. This will feature the 1957 Bel Air and the 1970 Ford Mustang, both in Black with Flame art.

As always, remember to click the images. There are MANY more images available for most of these releases, so you know just exactly what your getting into with the beauties!
Posted by Maleia - Senior Product Manager at 1:58 PM