The announcement of Dragon's impressive 1/6 scale Panzer II tank has been creating a lot of excitement here at 3000toys.com as well as worldwide. This Panzer II is part of Dragon's 1/6 scale Action Figure collection, and it's an important part since it's the first ever tank in this lineup. 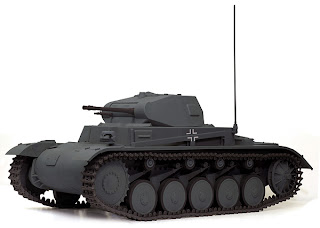 The actual tank variant is a Panzer II Ausf.B, which was produced by Germany from December 1937 through to June 1938. The 8.9-ton tank was a mere 4.81m long, and it was operated by a crew of three. In the turret was a 20mm KwK.30 cannon and a 7.92mm MG34 machine gun. The Panzer II was at the forefront of the German invasion of Poland in 1939, and it also featured in the Blitzkrieg campaign against France and the Low Countries in 1940.


As an Action Figure item, the tank is fully preassembled and pre-painted in a characteristic panzer grey scheme suitable for the early battles of WWII. Even though the original tank was diminutive in size, this model built to exact 1/6 scale poses a significant presence thanks to the large scale. Appropriate crew figures from Dragon's vast Action Figure range can also be matched with this tank. Details are accurately represented, and there are numerous details too, thanks to the large size. The turret rotates, the gun elevates and depresses, and in addition, the commander's hatch in the turret can open. This means it's perfect for fitting a tank crewman figure in the hatch. Collectors will certainly want to clear space on their display shelves to park this scintillating Panzer II Ausf.B!

Posted by Tom - Director of Product Management at 4:38 PM