The Chevrolet Camaro has been a popular favorite ever since it was first released in 1966. It was introduced at a press conference on June 28, 1996, as a key competitor against the Ford Mustang. When asked what a "Camaro" was, Chevrolet product managers confidently answered that it was "a small, vicious animal that eats Mustangs." The beautiful car was then offered for sale a few months later on September 29.

In 1969 the Camaro took on a slightly different look, and that together with the optional features sold over 230,000 of the 1969 Chevrolet Camaro Z/28! This car was super stylish and super powerful - the Z/28 power package included a special 302 cubic inch V8 engine with officially 290 horsepower rating, dual exhausts, special front and rear suspension, heavy duty radiator and temperature-control fan, quick ratio steering, and 15 x 7 inch rally wheels. Top speed for this package was estimated at 120 mph!

The 1969 Chevrolet Camaro Z/28 is exactly what we have here. This First Gear model of the '69 Camaro comes in Tuxedo Black with White stripes and features the following: opening hood with complete engine detail, opening doors with fully detailed interior, poseable front wheels, and opening rear hatch with spare tire. 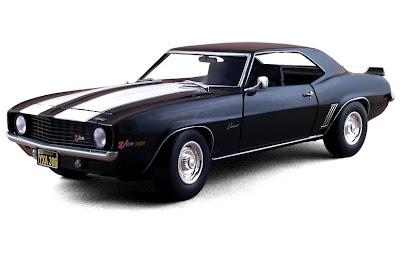