Hobby Master is a company committed to producing high quality collectible items. For some time now we have only carried bits and pieces of Hobby Master’s line of the Ground Power, Air Power, and Airliner series. But now we at 3000toys.com are thrilled to announce that we will be carrying Hobby Master’s FULL line of products. That means we’ve added over 200 items!

I want to take a second and profile one of their newest items that I think will really catch the eye of collectors everywhere. 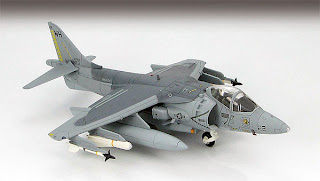 Modeled after the AV-8B Harrier US Marines VMA-542 “Tigers,” this 1:72 die-cast model captures several of the features that make the AV-8B unique. The Harrier is the first operational Vertical/Short Takeoff (V/STOL) and Landing aircraft. By directing the exhaust through movable nozzles the force could be used to propel the aircraft along a runway or lift vertically and then into a forward motion; this ability to lift off vertically helped the Harriers to begin to be referred as “jump jets.” 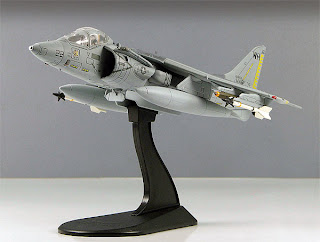 The VMA-542 was initially commissioned on March 6, 1944 as VMF(N)-542 and have been through several modifications until the VMA-542 variation was introduced in April 1986 that gave the squadron a greater V/STOL capability as well as extending the range and increasing the payload. The 542nd has participated in WWII, , , Desert Shield and Desert Storm, Kosovo, and Operation Iraqi Freedom in 2007-08.

We are excited to carry such an interesting, innovative, and historically steeped aircraft. The icing on the cake is that it is being offered by Hobby Master, a company that is dedicated to making the best military die-cast models.

Check out this product on 3000toys.com and don’t forget to look through all the new releases we are stocking from Hobby Masters!